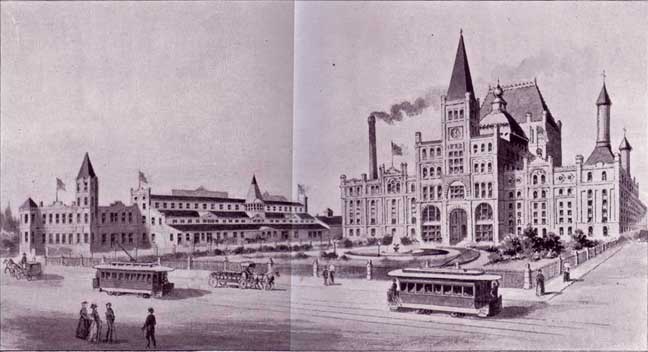 Because if you can, you should

Following up a little on Dan’s post… The thing we’re trying the most to sort out these days is certainly the where of this operation. Â We really can’t, it’s true, talk too much about ongoing real estate transactions, but we can certainly speak more generally at unreasonable length. Â So, let me open this by saying that, as others who have trod the path before us have discovered, we’re finding that theÂ where of making beer is very critical, as it intersects with a bunch of things.

For example, location at a geological level interacts with the chemical makeup of your water. This in turn impacts especially the mashing stage of the brewing process, andÂ ultimately, the flavor of the final beer. Â This is so critical, in fact, that some styles developed precisely because of where the breweries were located- Czech Pilsner (e.g., Pilsner Urquell) being one of the best examples. Â Without that very soft, or mineral-free water, the hop expression in that beer would be entirely different.

To be fair, this aspect of location doesn’t matter so much to us in the sense that, location-wise, whether we’re in one building or another– west side, east side, wherever we end up–the water will be essentially the same. Â That is, no matter, we’ll be using Buffalo, Erie Co. water. Â Still, the type of water we have to work with, specifically in terms of mineral content and pH, has an impact on the types of styles we can produce with minimal fussing and those that will require some serious attention to our water chemistry. Â The good news is that local water is broadly adaptable to a wide range of beer styles as is. Â Also, at the nano-level, the salts and buffers used to adjust water chemistry aren’t going to cost a fortune, when they are needed.

So, much more important with respect to location than water is the actual condition and potential of the building itself. Â Brewing, even at the one-barrel level, is an industrial process, even if there is a brewer’s art behind it as well. Â And that means we need some industrial-grade facilities. Â The most obvious point here is utilities- water pipes in and waste pipes out, electricity, natural gas- all of those are critical. Â And, we’ll need very strong, waterproof floors with good drainage… brewing equipment is heavy and gallons of beer are, too- even one barrel will weigh about 250 pounds. Â There will be even more constraints to come once we build-out the space, to meet health-code requirements and the like. Â On top of it all, we have to estimate the total space requirements, which means estimating a storehouse for grains, a cooler for hops & finished beer, the brewhouse itself and space for fermenting, packaging, cleaning, yeast lab and sure, at least some kind of office. Â Not to mention room to grow…

so, yeah, location: it can quickly boggle the mind.