Ok, so maybe the latter isn’t exactly CBW canon, BUT there’s a good chance that your valentine loves beer, and do we ever have THE perfect beer to help you make a splash: 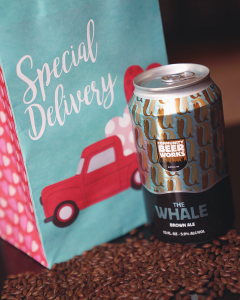 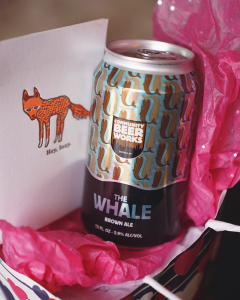 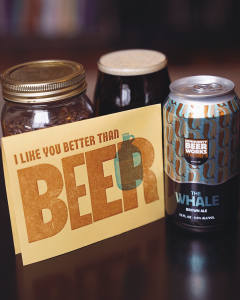 The Whale is an unmistakable brown ale; smooth, surprisingly drinkable and packed with flavor. We layer distinctive English malts with a touch of hops to create flavors and aromas of coffee, chocolate and toasted grains. As much fun as The Whale is to drink, it’s exceptionally great to cook with too!

We asked our Taproom General Manager Joseph Creegan to come up with some tasty recipes using The Whale that are perfect for sharing this Valentine’s Day!

Scroll through to see what sounds good to you, then get ready to cook! You’ll even find a downloadable PDF for each recipe. Enjoy!

STEP ONE
Mix the flours together and sift to remove any clumps. Combine with baking powder, salt and sugar.

STEP TWO
Melt the butter and add it to the flour mixture along with a full can of The Whale.

STEP THREE
Mix together by hand or with spatula until the mixture is a thick batter consistency.

STEP FOUR
Pour into a greased-up bread pan and bake at 350 degrees for one hour.

STEP ONE
Combine spices until mixed together.

STEP TWO
Rub that butt down with spice mixture, making sure you cover every side.

STEP THREE
In an oven-safe pot, sear each side of the pork butt, then pour The Whale until it covers ¾ of the pork.

STEP FOUR
Roast low and slow in an oven set to 250 degrees for roughly five hours, or until the meat is tender and easily pulled apart.

STEP ONE
Combine all ingredients in a large mixing bowl or a blender. Mix until well blended.

STEP TWO
Enjoy the remaining half a can of The Whale!

STEP ONE
Mix flour and spices together. Sift the mixture twice to ensure there are no clumps.

STEP TWO
Whisk egg whites until they are very frothy—like the head of a beer!

STEP THREE
Combine the flour and egg whites together. Slowly add a half of a VERY cold can of The Whale. Tip: Put the can of The Whale in your freezer 10 min prior to use.

STEP FOUR
Enjoy the other half of The Whale!

STEP FIVE
Toss your favorite veggies in cornstarch, dip them in the batter, and deep fry in oil at 350 degrees for two minutes. Note: The batter cooks very quickly. You may want to pre-roast or blanch your veggies to a consistency you enjoy ahead of time!

STEP ONE
Preheat oven to 350 degrees.

STEP TWO
Mix all ingredients together until well blended.

STEP THREE
Bake for 35-40 minutes or until you can stick a toothpick in the center and it comes out clean.

STEP ONE
Combine butter cubes, chocolate and The Whale in a metal bowl. Tip: It’s not necessary but you may want to listen to Iron Maiden or Slayer for this step!

STEP TWO
Place the bowl over a pot of simmering water and mix together until melted together and smooth. Set aside to cool.

STEPFIVE
Fold the cooled chocolate mixture into the whipped egg whites and slowly fold in the whipped cream. Fold in the cheese, David!

Move over cupid, CBW is coming though!