Hey, the top of the mural is sort of shaped like an inverted CBW shield

Yes, today is St Patrick’s Day, but rather than discussing anything green we’re instead talking about something… blue.

Yes, as announced on Facebook last week, Monday, April 18 CBW is going to be at the Blue Monk from 6-7:30. We’ll be bringing prototypes of our two beers, an APA and a saison. Rudy says that the APA is ‘close to being nailed down,’ while the saison is ‘very much in beta.’ What does this mean for you? Well, you’ll be getting free samples (as we can’t charge for our beer), which might be how our beer will taste once we’re in production. Have comments or suggestions about them? We’d love to hear it. Just want to talk to brewer Rudy? He’ll be there, with bells on!*

Are you coming to the event? RSVP on Bookface! 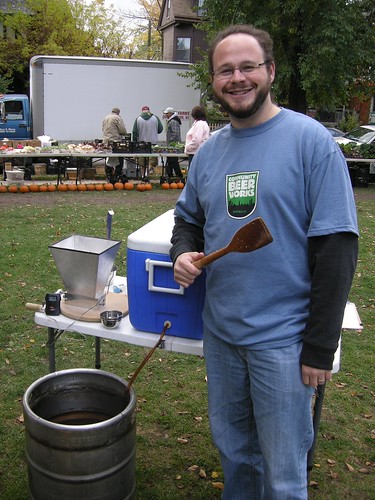 It's Rudy! He's friendly! Come talk to him.

In addition to the beer and the handsome, bearded faces, we’re also going to have CBW t shirts on hand. Already have our Abaca Press shirt? Call me Steve Jobs, because we’re going to have an entirely new and different shirt to sell! (Unlike Mr Turtleneck, we’re not claiming these will be better, because the Abaca shirts still rock quite a lot. Our supply of those is dwindling, so if you’d like one, act quickly). We’ll have more specifics on what these shirts will look like, who is making them and how much they’ll cost before the event.

To conclude: do you enjoy the consumption of beer? Would you like to hang out with us and try some prototype beer? Then make sure your calendars are clear on April 18. (Don’t worry, How I Met Your Mother will be a repeat that night)