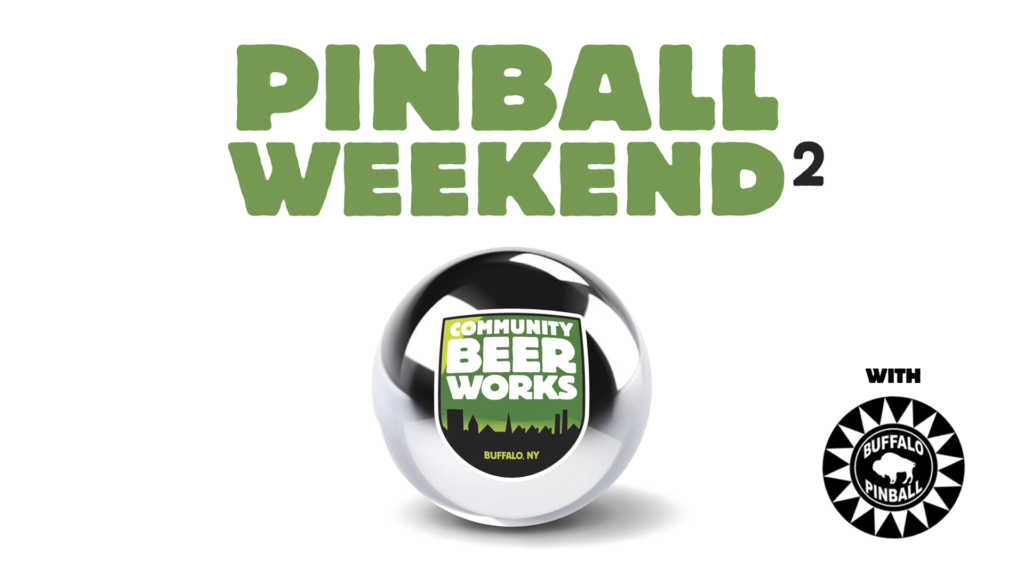 Starting Thursday 3/8, we’ll have several pinball games in our taproom! Plus, the bros from Buffalo Pinball are going to be in house to livestream an episode or Bro, Do You Even Pinball?; which will be broadcast live from https://www.twitch.tv/buffalopinball at 8pm EST and thus, we are going to extend retail hours until 9pm that night!

On Friday 3/9, we’re brining back Rage Tilt APA, an easy drinking 5.5% ABV American pale ale made with Amarillo, Galaxy, and Azacca hops with lots of tropical fruits and citrus meant for knockin’ the chrome balls around.

Half of all the coins pumped into our pinball games will be donated to The Boys and Girls Clubs of the Northtowns. Additionally, $1 of each pint you purchase over the weekend will go toward the charity (so drink up).

On Saturday 3/10, Buffalo Pinball will hold 30 minute training sessions from 2-6pm to help you get ready for the tournament. Sessions are included with a $5 donation to the Boys & Girls Clubs of the Northtowns. Each 30-minute session will include three people. Simply come to the brewery if you don’t mind having a pint while you wait for the next open session, or message us here if you’d like to sign up for a specific session ahead of time.

On Sunday 3/11 we’ll have our Second Annual Charity Pinball Tournament. Qualifying rounds will be held from 11am-4pm. A $1 donation to the Boys & Girls Clubs of the Northtowns gets you one registration into the tournament—you can try more than once! For each attempt, you’ll receive a raffle ticket to win prizes. There will be three machines to qualify on. You need to play each machine at least once, but can keep playing them to try to improve your score.

Playoffs start promptly at 4pm for the top six qualifiers, with the top two getting byes straight to the finals. Playoffs will be two rounds, one game each round.

We’ll post on Facebook about the specific games and prizes, as well as other goodies being featured that weekend (like tasty new beer releases). Until then, practice up on your pinball skills and get ready to join us every day for Pinball Weekend 2 at CBW!