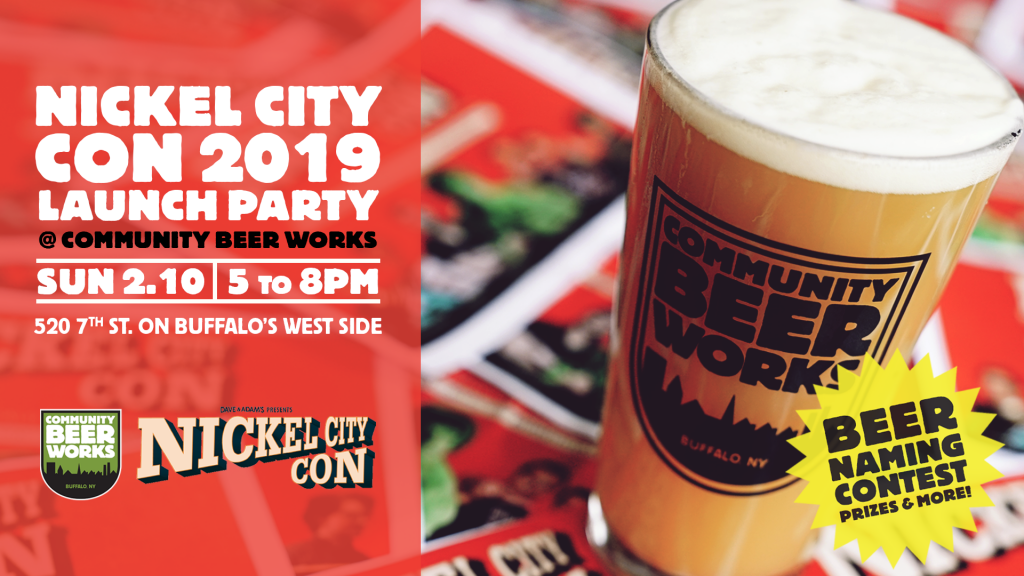 WHAT IS NICKEL CITY CON?

Imagine a room filled with the world’s greatest super heroes, movie & television characters, and yes, even the villains. A giant space where this world and the world of fantasy collide—that’s Nickel City Con. NCC is Upstate NY’s Largest Comic Con.

WHAT’S BEER GOT TO DO WITH IT?

Glad you asked. Every year CBW makes THE official beer of the NCC and let’s the fans name it; the tradition continues in 2019. The Con beer (a lighter-bodied American pale ale bursting with tropical and citrusy hops) was first called “Wizard Needs Beer Badly“, then “1.21 Gigahops,” and most recently, “The Hopside Down.” What will it be this year? We’re currently running an online contest to let NCC fans name it—and you guessed it—the contest concludes at the launch party. The final two (2) names will come head to head in our taproom as guests cast their final vote via paper ballot*. We’ll even have the Con beer on tap to help you decide its fate.

*One paper ballot per guest. Top two (2) names will be determined by online vote among the four (4) runner-ups prior to the launch party. The winning name will be announced before the end of the party.

WHAT ELSE CAN WE EXPECT AT THE LAUNCH PARTY?

We’re not simply asking you to come drink and name a beer; from 5 to 8 pm you can expect:

• Photo booth with props—post your pics for a chance to win cool stuff throughout the launch party!

• A live recording of the The Geekiverse Podcast with live prizes

• More to be announced: We’ll post about prize details, additional activities and surprises as we get closer to the launch party

Join CBW, the NCC crew, Dave & Adam’s, and The Geekiverse for an evening of photo opportunities, prizes (so many prizes), beer and most importantly, fun as we get ready to launch Nickel City Con 2019!